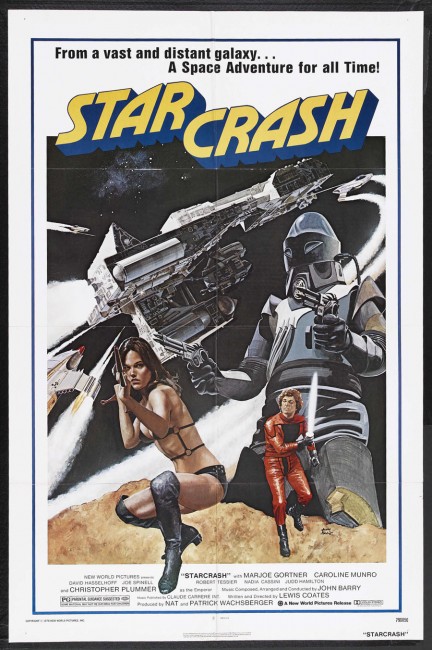 Tonight I sat down with a couple of good friends, a big goblet of Olallieberry wine, and a DVD called “Starcrash.” I saw the film once, years ago, and at the time I sorely wished I had purchased some alcohol first. A goblet of dessert wine seemed just the thing to add a touch of class to my evening.

“Starcrash,” is a mind-blowing Italian space opera from the 1970s. According to IMDB, its official title is “The Adventures of Stella Star” but for the life of me I cannot find any cover art bearing that title. It will always remain “Starcrash” to me. And every time I watch it, I will rip my hair out a little and shout, “What am I doing with my life?”

Now, it is important to note that “Starcrash” came out about one year after “Star Wars Episode IV.” One year is the perfect amount of time to throw together a low budget rip-off of a blockbuster film, and Mac Filmworks Inc. did very little to disguise the source of their inspiration.

Also, DAVID HASSELHOFF IS IN IT. As the missing Prince Simon. And his father? Academy-Award winning actor CHRISTOPHER PLUMMER. Whyyyyy, Christopher Plummer, whyyyyy. I hope they paid you well. Though I guess you did get to wear some blinging gold chains over your Emperor armor.

The plot is pretty straightforward. Stella Star and her buddy-in-crime Akton (who, by the way, has an amazing white boy curly fro) are on the run from Thor, Chief of the Imperial Police, and his partner Police Robot Elle. They are easily captured and sentenced to hard labor. After about twelve hours of labor, the Emperor of the First Circle of the Universe commutes their sentence, and in exchange they must save the universe from the evil Count Zarth Arn. The Count has created a “limitless weapon,” so vast, so huge, that it requires an entire planet to conceal it.

Did you hear that, Star Wars? An entire planet! THAT IS SO MUCH BETTER THAN A MOON.

Stella and Akton (along with Thor and Elle) must sail across the Haunted Stars, find the Count’s secret planet, and destroy it. When they are done with that, the Emperor asks that they also find the commander of his missing probe ship, his only son.

They travel to several planets in their search. A planet of bikini-clad Amazon women (“We better move! The Amazon airfighters will be here soon!”), an ice planet (at night the temperature drops “thousands of degrees”), and finally a planet of leapfrogging cavemen, where they find Prince Simon and the Count’s massive weapon. Akton mostly hangs around the ship, playing with bad computer graphics, while Stella and Elle run around planet-side. At this stage I should mention that Elle is a supremely nervous android like C3PO, except he has a ridiculous Southern accent and says things like “Y’all don’t follow us now!”

Also, they fight stop-motion droids—sorry, golem. Also, Akton has a lightsaber—sorry, light sword. Also, they fight the Colossus from “Jason and the Argonauts”—except this one is made of tin foil and it is an Amazon so it has boobs.

Of course there is a great climactic space battle (the Count’s ship looks like a giant robot hand, which can close into a fist), Stella saves Prince Simon (and falls in love), the Count is defeated, and the weapon destroyed. Whoops and hollers of triumph all around. The Emperor gives some uplifting speech about life directly to the camera. Fade to space credits.

1. The cast. Did I mention that Prince Simon is played by DAVID HASSELHOFF? The eye make-up, it blindses us. And Christopher Plummer (who spends half his scenes as a hologram) appears to be very uninterested in every line he speaks. Just cash in that check, baby. Then of course there’s the evil goatee-wielding villain Zarth Arn (Joe Spinell), the ridiculous Southern robot Elle (Hamilton Camp), and the sexy Stella Star herself (English model-turned actress Caroline Munro).

2. The dubbing. The film is Italian, and thus has some terrible everybody-is-reading-their-lines-off-a-piece-of-paper English dubbing. Hasselhoff and Plummer provided their own English voices, of course.

3. Stella Star’s wardrobe. It consists mainly of thigh-high boots and an alternating choice of three different leather bikinis, each one completed by a popped collar. The bikini changes frequently from scene to scene. On the ice planet she has skin-tight leggings and long sleeves beneath a silver one-piece. On the craggy rock caveman planet she puts a clear plastic jumpsuit over the bikini. And always the popped collars.

4. The many dei ex machina. Every conflict in the film is solved by a new and ever-more ridiculous last-minute plot twist. OH, you’ve been psychic this whole time? OH, you have laser eyesight? OH, you have the power to thaw people out with laser hands? OH, your spaceship can halt the flow of time?

5. The space fights. I learned some new things about the laws of physics thanks to this film! For one thing, ships make a hell of a lot of noise in the vacuum of space. Also, when things explode in space fireworks go off. Also, if you shoot a missile through the glass window of a spaceship, no depressurization occurs. And the missile lands gently enough that men can climb out of it uninjured and start fighting!

2. “I’d say it’s red hot potatoes for a couple of small time smugglers like us!”

3. “Now maybe it’s time to use your ancient system of prayer, and hope it works for robots as well.”

4. “This is fantastic! Pre-programmed computers? They could run forever!”

6. “You know, boy, I wouldn’t be Emperor if I didn’t have a few tricks at my command. Imperial Battleship? HALT THE FLOW OF TIME.”

NEXT WEEK ON THE PHENOMENAL COSMIC MOVIE COLUMN:

My thoughts on book adaptations. Dudes, don’t get your panties all in a bunch! (unless I loved that book)