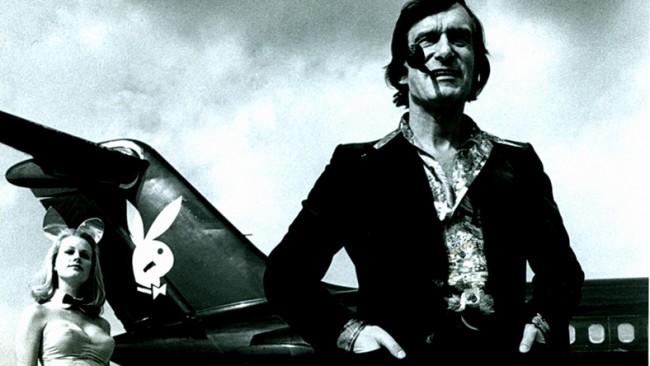 Hugh Hefner’s name is synonymous with so much and yet so little. The impresario, cloaked in his now obligatory robe, is like a messiah atop a mystical mountain of excess and intrigue. How can a man whose face is so universally known have a soul so devastatingly enigmatic? In Brigitte Berman’s documentary, Hugh Hefner: Playboy, Activist and Rebel, the poobah of plush is not altogether revealed but instead pried at with curious hands. Who really is this monolithic figurehead of American sexuality? One can almost be desensitized by Hefner’s omnipotent presence in American history, as if he were always a figure in your life, a street sign or a distant but all too familiar neighbor.

What’s so fascinating about this look at Hefner is that he isn’t flexing his hand around a glass of scotch, coddling a buxom girl, or raising that wry smile. Berman’s documentary shows a less playful, entirely more humanistic, look at the wily old entrepreneur. You get to see Hefner lean over, thumbing his way over droves of yellowed articles and bleeding photographs, as he speaks about his enemies, loves, accomplishments, disappointments. Suddenly, during these confessions, you become introduced to what’s underneath his billboard skin. Hearing Hefner talk about his opponents, primarily in the early days of the magazine, shows flashes of empathy for both them and the times. When he truly opens up – and he is asked a lot of good questions here – that trademark smile of his becomes less like a bumper-sticker of a big publication and more of a captivating question mark.

The tone of the documentary is set to James Mark Stewart’s atmospheric score. You feel like you’re finally digging your nails under the decoupage of this Hefner’s storied history, seeing the other side of the photos, the jagged scissor trails. The inquisitive manner in which the music is incorporated is almost magical. It doesn’t hurt that the documentary’s pacing is artfully conducted, with each topic being addressed with just the right amount of time. The information flows almost instinctually, with none of the expositions seeming tired or without consequence.

The talking-heads in the film are flippant, often endearing, and provocative thinkers. Berman pulled from a well of interesting individuals, each one possessing a very different idea of Hefner (let’s face it, the man is a Rorschach in the first place). Among the historians of Hefner’s life are Jesse Jackson, for his first-hand experiences with Hefner’s pro-stance on civil rights; Gene Simmons, for his knowledge on sex, and, if you asked him, everything else; George Lucas, for I’m not sure what reason; and many, many others. It may sound like a motley crew – and it is – but the color wheel of faces melt together for an artistic and relevant take on Hefner the man. The most interesting interview comes from Chris Wallace, who speaks candidly about his first time meeting Hefner, and how reproachable he thought the young celebrity was. The most entertaining interview, however, comes from a mercurial James Caan, who belts out stories about topless woman and foosball. Ah, the thespian that is James Caan.

Not to say that this documentary is by the numbers, Berman even incorporates some cartoons, in the style of illustrations that Hefner had used to draw when he was younger, to bolster the documentary’s mood and creativity. Some of it, reminded me in fact, of the 2004 documentary, “In the Realms of the Unreal”.

You don’t have to particularly like Hugh Hefner or his floppy-eared empire, but to see this documentary is to at least have a more focused look at a man whose image seems to forever be caught in a blur of extravagances. The greatest accomplishment by Berman is her ability to unmask such a cultural figure whose identity was already thought to have been revealed – and yet, throughout it all, there is still some wonderment. Now that is an accomplishment.