Ben Stiller As Adam Sandler in Reign Over Me 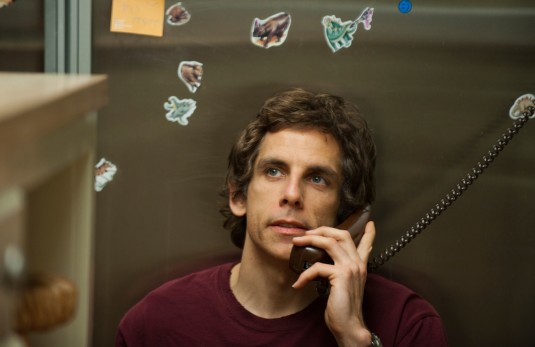 Steel skies, drab paint and innocuous gusts of Atlantic winds are generally typecast in director Noah Baumbach’s whimsical dramas. Baumbach is craftsman who is, because of his hushed love for autumnal colors and deadpan comedy, often creating movies rife with clever dialogue and stoic deliveries. He is, some would say, the depressed brother of Wes Anderson’s peculiar homage to the human experience. Anderson’s quirky characterizations of life, led by a vanguard of fluttering pastels and bemused lovers, can be seen in Baumbach’s work – only the narrative is a little less doe-eyed. We can go on and on (the two directors have worked together several times) but the point is made.

Here, in Baumbach’s coastally-gray world, he exchanges the East for the West. The archetypical drama and family problems, however, stay firmly planted into the soil of the director’s structure. Are the conflicts bubbling with buoyant quips and searing retorts? Unfortunately, for some reason or another, the exchanges between characters are not. The fiery existentialism of earlier Baumbach films are left on the East coast for the director’s newest film, “Greenberg.” Starring Ben Stiller, in a role that requires him only to have a legendary bed-head, “Greenberg” is a meditation on the fragility of self-worth and happiness – or it at least attempts to be the proprietor of that notion. The film, as a whole, operates as a sort of nuance-machine; subtle eyebrow movements and arm flinching makes up ninety-percent of the movie. Ever hear of the “mumblecore” genre of film-making? In essence it is, for the sake of either poor screenwriting or alleged profoundness, total minimalism on the part of acting, plot, pacing. Baumbach melds this particular genre of stoic existentialism into, considering there are minor semblances of his prior work’s charm and satirist nature, a sort of strange hybrid of the two styles. The end result is awkwardly inane film-making.

Greenberg (Ben Stiller) has just been released, as we’re told by his brother, from a hospital after a severe emotional breakdown. In order to relax, contemplate life and house sit for his sibling’s family while they’re on vacation, Greenberg is put in charge of a seemingly innocuous situation. All he has to do, in theory, is take care of the family dog and make sure the pool doesn’t overflow. But because Greenberg behaves like a narcissistic, angst-ridden child the aforementioned responsibilities become full-fledged hurtles.

The assistant to Greenberg’s brother, Florence (Greta Gerwig), ends up stopping by the house and catching the mercurial man-child’s eye. The two individuals, each lacking proper self-disciple and confidence in themselves, begin a strange pseudo-relationship that skews any normalcy in their already shaky lives.

The virtually inanimate exchanges between the two characters takes, because of the sloppy pacing and overwrought dialogue, much too long to become anything less than white noise once it actually registers. The tiring expose of Stiller folding his disheveled hair with his hand, once every two minutes, is paired with the dreary branding of depression onto his drooping eyelids. When Stiller isn’t behaving like a forlorn teenager, he is having manic outbursts of anger. Is this a character examination? A psychoanalysis of a man at loss? Perhaps it was meant to be, but somewhere, in the excessive translation, it is lost to pretentiousness and egotism.

Gerwig’s job in Baumbach’s film is to engage herself in wide-eyed expressions of shock or happiness. Gerwig snorts, puffs out her lips when sad, then, when the coast is clear, begins to mumble incoherently. The character she portrays in every movie is so air-headed that it makes the Hindenburg look like a child’s carnival balloon in comparison. We’re supposed to feel bad, though, because she’s as fragile as fiber glass and uses sex as a suture for a bleeding heart. More annoying is the fact that Gerwig can barely act and removes her top, which, I assume from this act reappearing in all of her films, that this is her version of a double threat.

The movie has Stiller and Gerwig talk on the phone; argue about asinine topics; talk on the phone some more. There is really no particular reason, other than if you want to see close-ups of Gerwig’s face for minutes on end, to see this lackluster film.

I think I’ll leave this one alone.