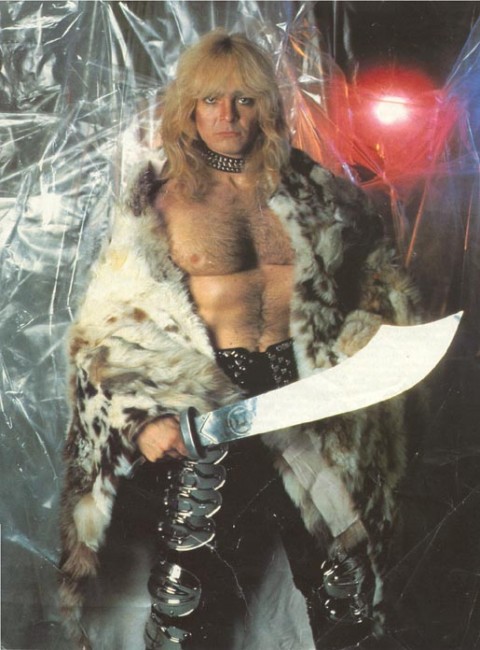 Jon Mikl Thor, the Legendary Rock Warrior, has had an expansive career spanning back to 1973 and continuing on in the present day. According to his VERY self-aggrandizing website, “THOR first made waves in the bodybuilding world, becoming Mr. Canada and Mr. USA, always using heavy music as an intensive training tool. He blended his powerful physique with powerful rock, and thus began this amazing cult legend’s long reign in the hazy area between superstardom and the dark underground.”

He is responsible for a good 25 albums, including such classics as “Thunderstruck: Tales from the Equinox,” “Beastwomen From the Center of the Earth,” and “Devastation of Musculation.” Beastwomen has even been turned into a series of rocking comic books.

And, most important of all, he was responsible for the 1987 film “Rock N Roll Nightmare.” Although, according to the title page in the opening credits it is actually titled “The Edge of Hell.” I don’t care what it’s called, all I know is that I absolutely ADORE it!

And then it veers sharply away from memoir and into crazy demon-fighting land, because this isn’t just ANY old farmhouse in Canada, this is a haunted farmhouse in Canada. I only keep mentioning the country because they make a point of it in the plot. The camera zooms in several times on their van’s Ontario license plate, and when one of the characters asks, “But why Canada?” Triton forcefully explains, “Because this is where it’s happening! The music, the film industry, the ARTS! And the only way to get you guys to rehearse is to lock you in some place with no distractions!”

Well, Jon, I wouldn’t exactly say no distractions. There may be no phone, and no TV, but there are a lot of couples in this group, and those couples feel the need to take a break between every song they practice. This is a B-Movie after all, and B stands for boobies.

The cast includes Triton, of course, with his amazing mane of bleach blonde hair and his post-bodybuilder musculature, along with his girlfriend Randi. She is there to tease Triton and oh-so-subtly hint that she wants sex all the time, though he is so focused on his music that he doesn’t even notice. Our sexual dynamo of a rock god here, people.

Then there’s the drummer, Stig, who spends most of the movie doing an atrocious Australian accent, and then turns plain American for the last half hour or so (he’s been replaced by a demon at that point, so I suppose it’s all part of the plan). That’s not even counting the scenes in which he busts out his Terminator impression. And then there’s his girlfriend, Lou Ann, she of the amazing 80s shoulder pads, the teased hair of doom, and the constant look of hostile boredom.

Next is guitarist Rod and his brand new wife Mary. Mary is kind of a homemaking prude, so it’s a little odd that she is so gleefully and modestly married to a guy in an 80s rock band. Mary says things like, “I’m sure Phil’s not dead or anything, he would have called!”

And then the final members of the band, Max (guitar), and Dee Dee (keyboard and spandex bodysuits). They aren’t a couple, but Dee Dee’s lip-licking hints throughout the first ten minutes of the movie make it clear that they will have sex before the end of it. Max is another surprisingly bashful rockstar. He blushes whenever Dee Dee makes a move on him, and when she finally drags him into a bedroom you can hear him calling out, “You know I’ve always respected you!”

Oh, and there’s Phil, the band manager. He mostly panders to the band, then gets seduced by a monster in disguise as Lou Ann, and turns into a green-handed monster guy, and eats some members of the local fan club who show up at 2 a.m. to meet the band. Anyway, we don’t care about him.

In between scenes of awkward flirtation and boobs, the band jams for their new album in the recording studio built in the barn. They always dress up, which I appreciate. Triton wears a superbly shiny silver tailcoat (no shirt beneath it, of course) for the song “We Live to Rock,” and a bright red polka-dot tailcoat (again, no shirt), for the absolutely epic track “Energy.” Because, you give me energy, that’s what you do, you give me energy, you get me started every day. Energy.

The house is surrounded by ominous music and wind. Lots of wind. Fast motion wind! There is also a lot of floor-level skittering camera perspectives, cluing us in to the fact that there is something lurking in the house with them.

We see the creatures haunting the house pretty early on, and they are a bizarre and wonderful facet of the movie. They are tiny one-eyed puppet monsters, and they make adorable high-pitched noises which are obviously a combination of voice-modified grumbling and whiny guitar riffs. Using guitar riffs for the monster sound effects? LOVE IT! In addition to that, these monsters occasionally manifest as people in the group, though they promptly blow their cover by developing giant toothy demon faces.

The ominous music is of course heavily supplemented by Triton’s music, because the band keeps tape decks all around the house with their own cassettes in them. That way they can rock out to their own music any time they’re preparing dinner, cleaning the dishes (a frequent scene), or going to bed.

By the last half hour of the movie every member of the group except Triton himself has been picked off by demons. Oh, and Triton finally caves into his girlfriend and engaged in horrifying shower sex.

I cannot discuss this movie without gleefully describing the climactic battle, so if you’re a spoiler-purist keep away. Really though, you don’t want to miss this.

Triton angrily cleans the dishes, frustrated that nobody is around to record music. He then engages in a scene of bizarre prolonged product placement with a Coke can, though I am POSITIVE Coke had nothing to do with the making of this movie. Before leaving the kitchen he mumbles, “Oh yeah, a Coke! I HAVE to have a Coke!” Then he spends some time drinking it at his work table, always visibly turning the logo toward the camera as he sets it down.

Randi heads up to the attic and busts out her demon voice. Triton is smugly skeptical. In a burst of red light Randi transforms into the biggest demon of all, with a bug face, bald head, and skinny waggling arms. Triton scoffs, “Nice effect, Randi!”

Enraged, the demon calls upon all of his tiny hand-puppet demons to arise and kill Triton, and oh my goodness but they are even more adorable when they are all lined up! Some have fuzzy little hairdos, and all of them have one buggy eyeball and squeaky voices. And tries to smoke a cigarette and has a teeny squeaking coughing fit?

Triton calmly scoffs, and declares the demon Belzebub, Shaitan as the Hindus call him. And Triton…

Triton is THE INTERCESSOR! Triton, the ARCHANGEL, sent down to do battle with the Dark Lord, and the rest of his band never existed, they were merely shadows, created by Triton to distract the baby demons. They were just characters he drew from horror movies, like “the one with the guy in the hockey mask!”

Triton is engulfed in bright white light, smoke, and wind, and he transforms! His fluffy blue sweater is gone. Now he wears a sparkly cape and gloves and a studded codpiece! His limp blonde hair is now TEASED TO ITS MAX CAPACITY! He makes crazy faces and flexes all of his muscles!

His rock music begins to blare. Satan throws rubber starfish at him, but he fights them all off INTENSELY. Then Archangel Triton engages Satan in hand-to-hand fist-fighting, and, of course he wins. Satan admits defeat and leaves the Earth in a series of red sparkler explosions.

And that, my friends, is “Rock N Roll Nightmare.”